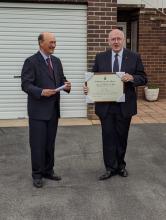 Among his many accomplishments, the former Governor General was the first Australian Head of State to honour Argentina with an official visit.