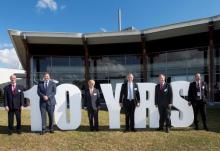 The nuclear research reactor OPAL, built according to the design and and the advice of the Argentine company INVAP S.E., celebrated its tenth anniversary on Monday August 8, 2016.

The event took place at the reactor's location, in Lucas Heights, near Sydney.

The following personalities took part in the celebration: Craig Laundy, Assistant Minister for Industry, Innovation and Science; Yukiya Amano, Director General of the OIEA; Adrian Patterson, CEO of the Australian Nuclear Science and Technology Organisation (ANSTO); Members of Parliament; Representatives of the Government of South New Wales; Carl-Magnus Larsson, Executive Director of the Australia Radiation Protection and Nuclear Safety Agency (ARPANSA); the Director General of the Australian Safeguards and No Proliferation Office of DFAT; Representatives from universities and research institutions, among other guests.

On the Argentine side: Pablo Abate, Vice President of the Nuclear Division of INVAP S.E.; Minister Eduardo Acevedo-Díaz, on behalf of the Embassy of Argentina in Australia and Officers from the Consulate General in Sydney, attended also the event.