“We are now ready. The best is to come” 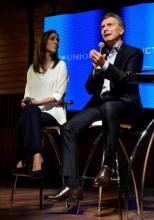 Message from President Macri, at the enlarged cabinet meeting this morning

“We are now ready. The best is to come”

President Mauricio Macri today declared that Argentina “is now ready” to start the process of sustained growth that will allow the country to progress with its zero poverty objectives, and called for all government departments to work together.

“We are ready. The best is to come. We are already generating quality jobs and our reintegration into the world has been impressive,” he stated, adding that “it is up to us now how fast we move; we need to push ahead with infrastructural plans and facilitate inflows of investment.”

The President spoke this morning on a variety of issues during an enlarged cabinet meeting, a regular gathering that brings together national and local officials.

Highlighting the recent agreement with the holdouts, he spoke of how essential it is to continue developing the “tools that will bolster investment, development and innovation.”

He called for modern communications structures - the “the highways of the future” - to give every adult and every child access to high-speed internet.

He repeated the government’s firm decision to put an end to the inflation that Argentina has suffered over the past decade, and promised that results will be seen in the second half of the year.

On foreign relations, the President voiced the government’s commitment to strengthen its international relations, “to say to the world that here we are, that we are a country that believes in friendship, in peace and in exchanging knowledge.”

On the country’s energy, mining and agricultural sectors, he called for the return to diverse, sustainable and reliable supplies that will enhance growth. He highlighted that this year’s harvest reflects “more than US $12 billion of investment by thousands of small and medium-sized producers across the country. This will mobilize all economies, will generate employment and will stimulate next year’s harvests by between 20 and 40%.”

On Argentina’s enormous potential for tourism, Macri committed to doubling the number of visitors to the country over the next 4 years.

Finally, he extolled the virtues of Argentina’s rich culture as a bridge with the world, an example of positive encounters rather than confrontation.