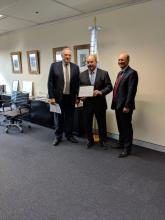 As part of the efforts of the Republic of Argentina to recognize citizens living abroad for their contribution in spreading the image and values of Argentina, last 31 August in the Argentine Consulate in Sydney was held a ceremony honouring Mr. Enrique ”Topo” Rodriguez, in which he was presented with a Certificate of Recognition.

Mr. Rodriguez received the distinction for his contribution toward developing and strengthening bonds among members of the community,

At the ceremony, apart from the honouree, were present Ambassador Hugo Gobbi as well as members of the Argentine community in Sydney.

The ceremony honouring Mr. Rodriguez was followed by the presentation to Ambassador Gobbi of a replica of the curved sabre worn by General Jose de San Martín, donated by Mr. Eduardo Ongay and family to the Argentine Embassy in Australia.