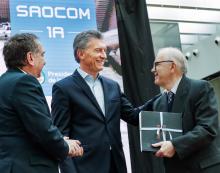 On 9 August, President Mauricio Macri announced the launch of the SAOCOM 1A satellite, an important step forward for Argentina in the field of scientific observation, which will be sent into space on 29 September.

The satellite will then begin its task of technological research applied to the improvement of industrial activity and to the prevention of hydrological emergencies.

The main objective of the SAOCOM Earth Observation satellites is the measurement of soil moisture, as well as use during emergencies, such as detection of ocean spills and follow-up of water coverage during floods.

As part of the National Space Plan, the satellite was designed simultaneously in the cities of Cordoba, Buenos Aires and Bariloche, in order to detect soil moisture and provide information in any weather condition and time of day.

The Argentine satellite will be able to provide information to prevent, monitor, mitigate and evaluate natural and man-made disasters (fires, floods, hurricanes, landslides, oil spills, plagues in agriculture, desertification, droughts and earthquakes). The images will be able to be used to monitor public works, crops, forest and marine resources; for determination of soil moisture and soil use; issues of security, among others.

The radar antennae technology will allow Argentina to access a real time “water map”, almost unique in the whole world (not just of the surface but also up to 2 meters below it), which will allow for prediction of harvest yields, as well as floods and droughts in fields and cities months in advance.

The data it sends will be received at CONAE’s Teófilo Tabanera Space Center, located in Falda de Cañete (Cordoba province), where it will be processed to obtain the satellite images which will later be distributed to users in Argentina and around the world.

The launch of the SAOCOM 1A is the latest in a list of Argentina’s milestones in the field of space activity, which includes launches of the four SAC-series earth observation satellites (SAC A, B, C and D/Aquarius) and the geostationary telecommunications satellites ARSAT 1 and 2, developed by INVAP.

Currently, our country – through INVAP- has the capabilities to develop comprehensive satellite projects, from the design engineering aspect to satellite construction, to provision of turnkey installations related to ground segment, which provide support to the satellites.

At the ceremony, President Macri also paid tribute to the former Executive Director of CONAE and founder of INVAP, 77-year old Conrado Varotto. Dr. Varotto advanced the Argentine space program by putting four satellites into orbit, and was also one of the best scientists of the 20th century, making a significant contribution to the development of Argentina’s nuclear program.