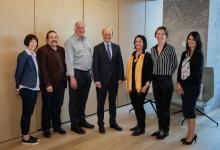 On Thursday 29 November, Ambassador Hugo Gobbi participated, in the city of Melbourne, in the Latin America /Australia South –South Symposium, organized by Deakin University, in which he gave a presentation on economic and political relations between Latin America and Australia.

The event received significant attendance, which included Latin American students, businesspeople, representatives from the Government of the state of Victoria, consuls from Latin American countries, and academics.