Launch of the Argentine satellite SAOCOM 1A 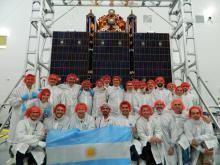 On Sunday October 7th, and under the coordination of the National Space Activities Commission (CONAE, in Spanish), the Argentine satellite SAOCOM 1A was launched into space. This constitutes a new milestone in Argentina’s space-based development, and places it at the forefront of space-based activity in the region, as well as within a select group of countries worldwide.

The launch of this earth observation satellite took place at the Vandenberg Air Force Base, in California, United States, and was carried out by the company SpaceX.

The SAOCOM 1A will have a significant impact on Argentina’s production sector and will be key in preventing and mitigating environmental catastrophes. It will provide precise information for agriculture, forestry, hydrology, oceanography, natural and man-made disaster management, the environment, cartography, geology, mining, oil exploration and health.

The SAOCOM 1B is currently under development and is expected to be launched in September 2019.

The SAOCOM mission is led by the CONAE and has the Argentine company INVAP as principal contractor for the design, manufacture, integration and trials of the satellites.