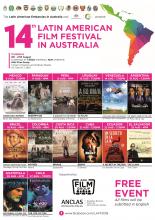 We are pleased to inform you that the 14th Latin American Film Festival, organized by the Latin American Embassies in Australia, will launch in Canberra next month and then will be showcased in 10 more cities around Australia.

In Canberra, the festival will be presented in collaboration with the ANU Film Group at the Coombs Theatre, ANU (corner of Garran and Fellows Roads) from the 9th to the 27th of August. As usual, it will be a free event. All films have English subtitles.

The Argentine film “The Heavy Hand of the Law” will be screened on Wednesday 15 August, at 7:30pm. The story is about a young lawyer who goes up against the justice system to defend a man accused of a crime in a small town.

We hope to see you there!