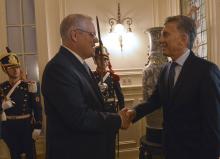 President Mauricio Macri met with Prime Minister Scott Morrison, with whom he discussed areas of general interest, particularly the possibility of reopening commercial air routes between Argentina and Australia.

The Leaders analyzed options for the company Qantas to once again establish flights between Argentina and Australia and, through Perth, act as a hub for conections to Asia, thereby considerably reducing travel time.