First Ambassador of Argentina to Vanuatu 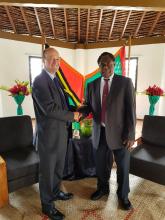 On the last 7 August, Ambassador Hugo Gobbi had the honor to present the Letters of Credence to the speaker of the Parliament of Vanuatu, Hon. Esmon Saimon. Ambassador Gobbi is the first Argentine official to be named Ambassador to the Republic of Vanuatu.

This occasion will surely lead to a deepening and expanding of relations between the two countries, as well as a strengthening of the bonds of friendship which unite us.

In this regard, on the same day Ambassador Gobbi met with Vanuatu’s Minister of Foreign Affairs and External Trade, Hon. Ralph Regenvanu, for the signing of the Agreement on Technical Cooperation between the Argentine Republic and the Republic of Vanuatu. The purpose of this Agreement is to promote technical cooperation between the two countries through the establishment of programs and projects of development, which could involve exchange of experts, training of human resources and exchange of material and equipment, among other possible activities.