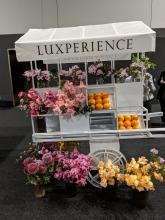 The Embassy of the Argentine Republic in Australia was recently present at the 2018 edition of the “Luxperience” luxury tourism fair, which was held from September 16th to the 19th at the International Convention Centre in Sydney. The Embassy was present providing support to the Argentine company participating in the event, Alchemy DMC, which represents several luxury hotels such as the Faena and Alvear in Buenos Aires, and Llao Llao in Bariloche, among others, as well as to hold meetings with travel agents interested in Argentina.